IS YOUR ONBOARDING PROCESS SUCCESSFUL?
This case tells you the three key steps to succeed with onboarding. It is all about connecting newcomers to the right mentors!

The Challenge of a Silicon Valley Startup

A fintech company based in Silicon Valley had grown from zero to +200 employees in only four years. This rapid growth was expected to continue in the coming years.

Innovisor was therefore asked by the CEO to determine how successful the onboarding had been. This would then resulted in key insights that could help the company to set a baseline, and – more importantly – help create a set of best practices for future onboarding.

The three steps to understanding your onboarding

The first key finding into the organizational network was that when they wanted to spread a meme in the organization, they knew exactly with which employees they should start with. There were 9 employees who directly influenced 70% of all employees. When looking two degrees removed from the nine influencers, the company was able to influence all the 250 employees.

The second key finding into the organizational network was that there was a correlation of influence to tenure, but a much looser correlation than expected. There were outliers on both sides. Many employees – the top cluster – had an outsized influence in the organization relative to their tenure. The cluster on the right shows that a handful of long-term employees never reached their influence potential. 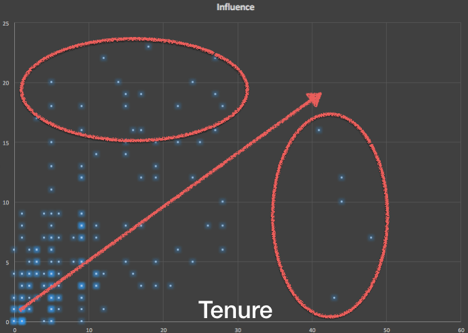 The third key finding was around the new employees. Now that the company knew that tenured employees have an advantage, the company wanted to know how integrated the employees were who had been with the company for less than six month.

So, this organizational network analysis helped the company to identify the most influential employees, and to understand how they did it s they could “manufacture” more of these high influencers.

Based on following the three steps and generating unique insights in their informal networks, the company decided to run three specific actions to strengthen its onboarding process:

Do you also want to change to an evidence-based onboarding process? Contact us!

Getting your onboarding process right is essential for making sure that your newcomers are welcomed into your organisation, feel supported, and become productive members of your team more quickly. Are you ready to take your onboarding strategy to the next level?